skip to main | skip to sidebar

Saturday 8th April 2006, Caen, Normandy
This morning we woke to grey skies and the sound of cold rain pattering against the window, a complete contrast to yesterday. We have spent a relaxed day around Caen with Geneviève. Mid-morning we went down into the town, peering into estate agents windows looking unsuccessfully for the perfect property at a give-away price. Around lunchtime we attended a free concert at the Eglise Notre Dame de la Gloriette. The concert was given by young students from the conservatoire as part of their Audition de la Maîtrise de Caen. Entitled Bach Romantique the concert included works by Felix Mendelssohn, Charles Gounod and Peter Cornelius. We were also treated to the somewhat surreal sight of seven ballerinas in tutus dancing in front of the altar. (We imagine this lovely baroque church has been deconsecrated and is now used primarily for concerts.) There was a packed audience of proud parents, grandparents and siblings of the young musicians as well as the general public happy to participate in a free concert of such a high calibre. 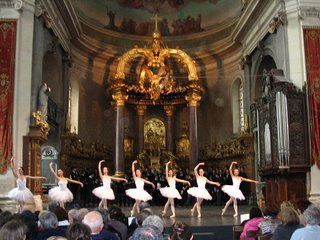 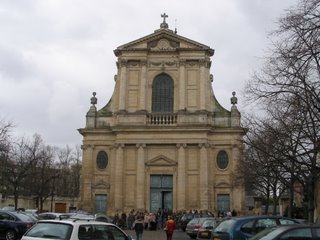 Leaving the concert at Eglise Notre Dame de la Gloriette, Caen
We planned on lunch in a special little restaurant in town but so too had too many others. Unable to get a table we all returned for lunch in the kitchen while the rain continued unabated. During the afternoon it eased and we accompanied Geneviève to yet another of Caen's massive garden centres searching for a selection of shrubs for the newly constructed trellis Ian had fixed to the garden wall.

During the evening we went our separate ways, Geneviève for supper with friends while we visited Claire to receive the happy news that Katie yesterday gave birth to a health baby boy in a Paris clinic. We were delighted too that Marc, Neil's childhood pen-friend who came out to Sri Lanka to join us for his wedding, happened to be at home. He and his mother Claire both speak excellent English so we had an easy, relaxed evening drinking the health of the new baby and its parents while chatting over the many years of friendship we have enjoyed together. Watching our children's friends growing from childhood to adulthood and parenthood is a very happy, long-term experience. 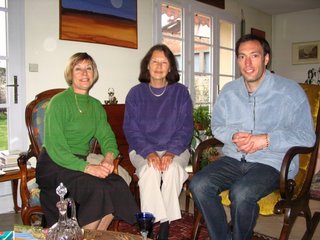 With Claire and Marc in Caen

Sunday 9th April 2006, Caen, Normandy
It has been a day of disasters starting with the lens in Jill's driving glasses falling out when the holding screw got lost. Next the camera packed up so unless we can get it repaired while we wait it will be impossible to continue our illustrated blog.
We had planned on moving on to Brittany tomorrow but until these problems are rectified and Jill can see where she is driving, we are rather stuck.

To add to our worries Neil contacted us to say there had been a leaking pipe on the central heating system in our house requiring the services of an emergency plumber. Fortunately somebody was in the house and has been dealing with the problem but there has been some damage to the carpet, fireplace and wall.

On a more cheerful note though, we have had a very happy day. During the morning Geneviève drove through the sunny countryside to St. Pierre-sur-Dives, a formerly affluent little Normandy town that sits astride the Greenwich meridian. The town's former wealth was due to its geographical location between the flat arable lands of the Plaine de Caen and the lush, undulating pastures of the Pays d'Auge where the region's sheep and cattle are reared. There is a huge medieval market hall in the centre of the town formerly used for trading in grain and livestock. Today it was being used as an exhibition centre for a craft fair. We were impressed with the quality of the work on display ranging from leatherwork, ceramics and bookbinding to ironwork, wood carving and furniture making. 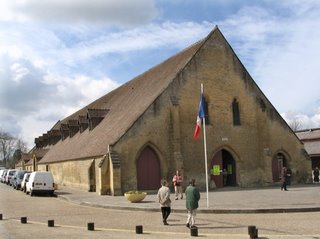 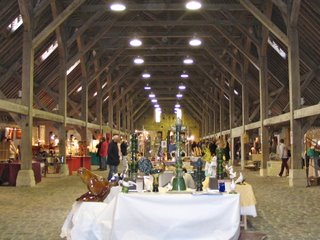 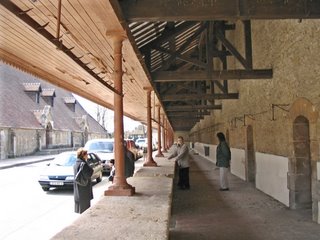 Old butchers' stalls, St. Pierre-sur-Dives
Later we sat on the terrace of Le Greenwich with beers and coffees enjoying the unusual warmth of the sun before taking a stroll around the town to discover the deserted and rather dilapidated abbey buildings with its cloister and crumbling mediaeval statues. 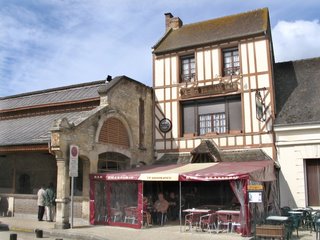 On the Greenwich meridian, St. Pierre-sur-Dives 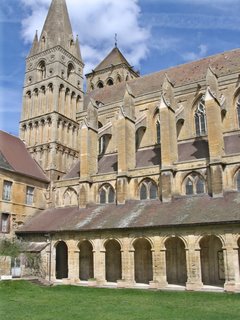 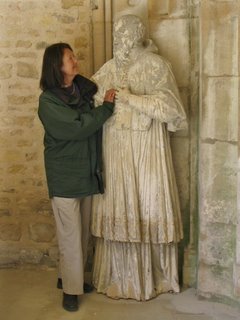 Making friends with the natives, St. Pierre-sur-Dives
After a brief investigation of the public conveniences we continued through delightful, picturesque countryside past beautifully restored manor houses in extensive grounds, now mainly used as breeding centres for sleek brown race horses and known as haras. Scattered throughout the area are tiny hamlets of quaint little picturesque cottages constructed from mud and straw infill between solid wooden timbers. This style of domestic architecture is known as pan de bois or colombage. Mainly the cottages stand in pretty flower-filled meadows or gardens with tiny streams nearby, overhung with bright green fronds of weeping willow trees. Along a winding narrow road that meandered through the leafless wooded countryside, its edges bright with celandines, primroses, violets and anenomies, we paused to investigate the pretty hamlet of Ste.Marie aux Anglais with a tiny cream stone Romanesque church and its timbered manor house set back in wooded grounds. 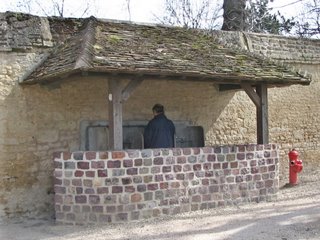 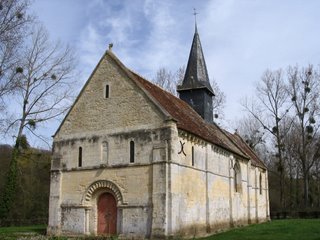 Ste. Marie-aux-Anglais
There are many other farm buildings, barns and country houses in similar style, all ancient and twisted with brown timbers and cream infill. One of these is Coupesarte, a mediaeval timber-framed manor house standing directly in a water-filled moat and surrounded by similarly constructed outbuildings. Unfortunately at this point our camera packed up so we have only one rather poor photo of this beautiful building. 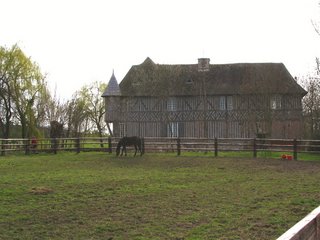 Further on we stopped again to gaze in envy at the former rural home of the writer André Gide. Once the leaves appear on the trees it will be quite hidden from the road. None of these properties are open to the public and most appear to be owned by wealth people from Paris who use them as weekend retreats.

We gradually made our way back to Caen via yet another of France's most beautiful villages, Beuvron-en-Auge which although certainly very beautiful with its entire street of maisons en colombage has been so restored, beautified and crowded with pretty shops and restaurants, it has become a showpiece rather than a living village.

Monday 10th April 2006, Caen, Normandy
Today has been a frustrating round of sorting out yesterday's problems. We went down into Caen around lunchtime – almost all the shops in France are closed on Monday mornings. Getting Jill's glasses fixed was both free and easy. Getting the camera repaired was impossible. We were told it would have to be sent to Paris, the repair taking three weeks to complete! We don't even know where we will be in three weeks time and we need the camera immediately. So we were obliged to buy a new one and will get the original repaired when we return to England. Of course the model has changed and costs more. Even the card from the old camera wouldn't work in the new one. Fortunately the software on the computer is compatible and as the man in the shop said, we have already taken more photos with the camera than most people ever expect to take!

The leaking pipes back home have also given us much anxiety but there is little we can do from here other than notify our insurance company there may be a claim in the future.

When Geneviève returned from a particularly difficult day at work we all decided it was time to stop worrying and to settle down to a pleasant last evening together. We have spent a very happy time here in Caen and have received the warmest of welcomes. It is good to know that we are welcome to return whenever we wish. 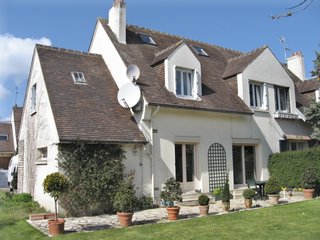 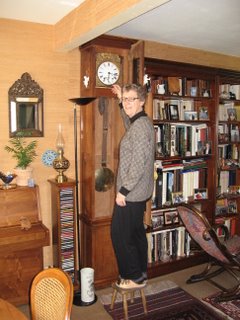 Travels around Europe by Jill and Ian, two recently retired librarians taking a "gap year" accompanied by Modestine, their faithful camping car. Click to view the Key to their epic 2005/2006 journey.

Complete index to all Maxted Travels with Modestine, series 1-5

Index to Maxted Travels with Modestine 5

Jill, Ian and Modestine
Genuinely interested readers and enquirers may email us at jillmaxted@hotmail.co.uk

Links to other Maxted blogs